Hurricane Harvey has reminded me, yet again, how important it is to be prepared.

Most of the time, things happen when we least expect it. Tornadoes, earthquakes, fires, power outages. Even with warnings like Harvey, and at least some time to prepare, those not in the direct path of the hurricane were still affected. The flooding in Houston has been astounding and historic.

My heart breaks for the millions affected (see below for ways to help).

One year after Hurricane Katrina, a TIME magazine poll reported that fewer than one in five, or 16 percent, said they were prepared for a natural disaster or public emergency. Half of the rest of those polled said they weren’t prepared because they didn’t live in an area at risk for disasters.

The truth is, though, 91 percent of Americans live in places at a moderate-to-high risk of disasters or emergencies.

So preparing for anything and everything can be vital, not only to our physical well-being but also to our state of mind. Thomas S. Monson said: “We live in turbulent times. Often the future is unknown; therefore, it behooves us to prepare for uncertainties.”

When our children were quite young, we used to make the 1,200-mile trek from Missouri to Utah quite often, even during the winter months.

For those of you who’ve driven I-80 during the winter, it can be an adventure with snow, wind, and/or ice. At any moment, the interstate can close without warning. You’ve seen the signs, the ones that say Road Closed When Flashing. Return to Evanston or Cheyenne or wherever. 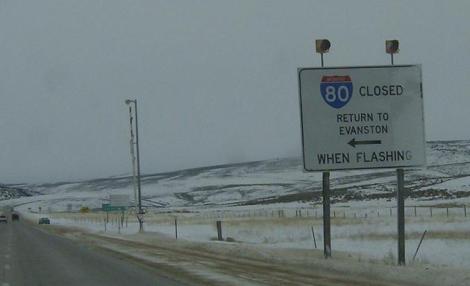 Knowing this has never stopped us from going, though. When my husband and I decided to head out with our kids for Thanksgiving in 2001, it was just another trip. We’d done it before with no problems – a little slowing down maybe while driving through horizontal snow – but nothing major.

I like to think that whenever we travel, we’re always prepared. We generally pack things like flashlights, a first aid kit, blankets, food, water, of course, clothes. And on this particular trip, we had also packed toys and extras for the kids.

But on our return trip home, we definitely were not ready for what was awaiting us in Nebraska.

It had been snowing all throughout Wyoming. Then it iced, and as we left Cheyenne and headed east across the state line, it started snowing again.

It was blowing hard and we were going dreadfully slow. We began noticing more and more cars slide off into the median through the darkness. We decided to get off the interstate at the next possible exit, which happened to be Kimball, Nebraska … population 2,500 and home to a Super 8 and a Burger King. And that was about it.

We checked into the motel for the night and soon learned that officials had closed the interstate.

The storm was so bad and it was so cold that we didn’t venture out, staying put in that room for three days. Yes, the interstate stay closed and we were stuck there for three days.

The interstate finally re-opened, and thankfully, we were able to make it safely home.

Most of us think that emergencies or disasters won’t happen to us, until they do. We didn’t. I had traveled along that stretch of road during the winter and had seen some pretty crazy things, but they had never been quite that bad.

Things would’ve been much worse for us had we not been as prepared as we were with food, toys and clothes.

Or on another occasion when the power was knocked out at our home by an ice storm. Or when we were without running water because of flooding. Or on and on and on. Things happen. Sometimes without warning.

There are many levels to preparedness. But if you’re just starting out, the Red Cross has plenty of resources and some simple steps to follow: make a plan, get a kit, be informed (learn more here). These simple steps could’ve played such a huge role with Hurricane Harvey.

Some people have laughed at me when I’ve talked about being prepared for an earthquake (in Missouri – yes, I do believe that one will happen), a terrorist attack, a pandemic or any other sort of emergency or natural disaster.

The Church of Jesus Christ of Latter-day Saints encourages members to have a year-supply of food, clothing, and, where possible, fuel (and plenty of water, too). Those things can help when disaster strikes, with a job loss or helping your neighbors when needed.

Some people think that’s crazy, to be prepared like that.

People didn’t believe Noah, either, when he was building the ark.

I’m not really comparing myself to Noah here. But I’d much rather be laughed at now … and be prepared … whether it’s something big or nothing at all.

If you’re looking for ways to help following the hurricane and flooding in Texas:

I donate to LDS Philanthropies as 100% of your donation goes to those in need (meaning they don’t take any of it for administrative costs). You can click here and donate next to the Humanitarian Aid Fund line.

The American Red Cross is another way to donate. Click here to donate.

There’s a very good thread on Twitter that has local ways to help. You can read the entire thread here.