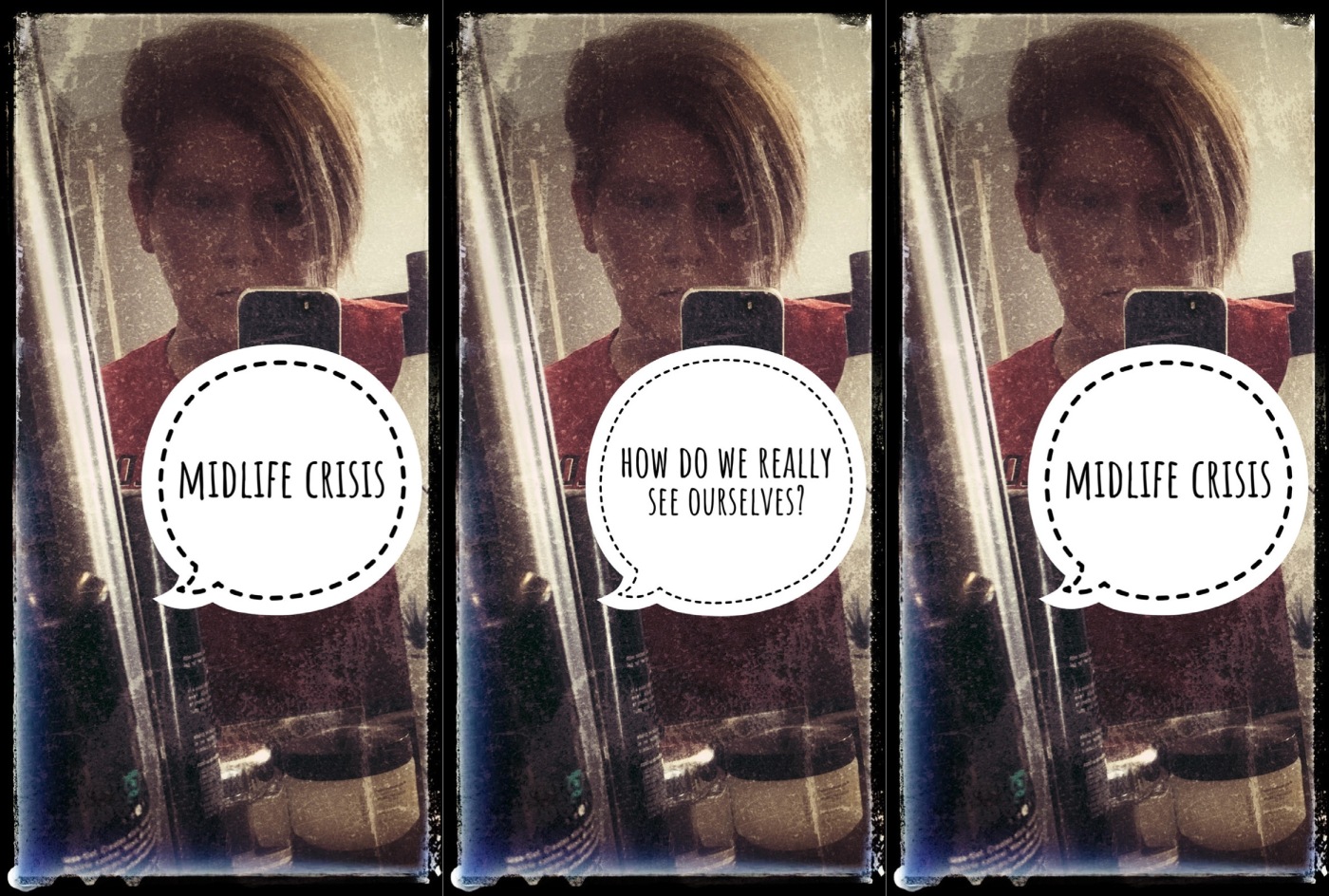 I chopped my hair off last week.

It was a bit above shoulder length so there wasn’t really that much chopping involved. But it’s definitely different … the semi-trendy asymmetrical bob with the shorter side nearly shaved (which has probably worn off its trendy tag by now … or did so long ago and the semi-label is now even stale).

I had basically had the same haircut, or a version of it, for over a decade and I really wanted a change.

The phrase midlife crisis crossed my mind, which gave me pause.

Am I having a midlife crisis? What does that even mean? Isn’t that only when men go out and buy a really expensive sports car? Or women get plastic surgery? Or something like that? I had no desire for either.

I started doing some self-reflecting and reading.

Before I get to the rest of my story, I’d like to share something I came across from Emine Saner who wrote “Women on the verge of a midlife crisis” in January 2017 for The Guardian.

She interviewed Warwick University behavioral science professor Andrew Oswald who said there’s overwhelming evidence that there is a midlife low. “There’s a very pronounced drop in mental wellbeing from about the early 20s down to the mid- to late 40s, and then a rise up. This is often described as looking like a U-shape.” And it doesn’t matter whether or not you have children or your education level or your socio-economic status. It basically affects everyone.

She also interviewed clinical psychologist Linda Blair who said “at different stages in our lives, we have different priorities and when those priorities need to change we experience a period of reforming.” She said this can be a very exciting time. “It’s not what happens to us…it’s how we see it.”

So while this midlife crisis or mental wellbeing drop is somewhat natural or inevitable, we choose how we respond to it.

It’s how we see it. I love that. For any stage of life or circumstance.

So back to my story …

I’ve previously written about a pretty low time in my life which happened over the summer of 2015 (‘Even the darkest night will end’ and Why I no longer volunteer).

For the last couple of years, though, while my chronic illness is as bad as it’s ever been, I feel like I’m living the best part of my life so far. I’m doing what I can, with what I have, where I’m at.

And while I spend most of my days stuck in bed, over the last year or so, I had been taking on more and more responsibilities with my time (that’s easier to do now with the internet). I had the attitude I was going to keep going until it killed me (this may or may not be wise). Some days, it felt like I was literally dying (yes, literally … and not how Chris Traeger used it on Parks and Rec).

Around June of this year, though, it started to catch up with me. I was exhausted. More than just how the illness makes me feel. I was both physically and mentally exhausted. And I knew I needed a break or I was going to be going back down that rabbit hole I went to in 2015.

So for the last couple of months, I’ve been re-evaluating my priorities and doing some personal reflecting when this idea of a midlife crisis came across my mind. And, in the process, brought up another idea I’ve been contemplating: how do we really see ourselves?

How do we really see ourselves?

Do we see ourselves as worth-less or worth-more?

I’m around a lot of teenagers and it seems like they are always hating on themselves. I’m dumb. I’m fat. I’m bad at ________ (singing, football, art, math, tennis). And on and on and on. They feel like they’re worthless. For a myriad of reasons, they forget their true worth.

Ronald A. Rasband said: “In the midst of life’s greatest storms, do not forget your divine heritage as a son or daughter of God.”

Teenage years can definitely be stormy, more so now than ever before. And in the perfect-Facebook-posting era that we live in, it can be even more difficult.

This feels true for the midlife years I’m currently living in as well.

We can add all of these fun and amazing filters to our Instragram and Snapchat photos or even physically change our outward appearance. But how do we really see ourselves? Are we remembering our true worth?

When I look at myself in the mirror, I can see a 40-something who looks a bit weathered with age and who has lots of little worry lines that have increased with having teenagers. But there are also lines of laughter that hold years of great memories.

Beyond those lines, I see a mind and spirit that are still very young and active, even if the body is much less so.

Sometimes, though, I can only see years of trials and mistakes or long for the wonder years of high school and college (my first life, as I call it, before the chronic illness). And I forget how much I’ve overcome and how really great my life can be right now.

Jeffrey R. Holland said: “(Don’t) dwell on days now gone nor yearn vainly for yesterdays, however good those yesterdays may have been. The past is to be learned from but not lived in. We look back to claim the embers from glowing experiences but not the ashes. God doesn’t care nearly as much about where you have been as He does about where you are and, with His help, where you are willing to go.”

So I don’t necessarily think I’m having a midlife crisis. Or whatever it’s called.

I’d maybe call mine a midlife transformation. And I’m liking what I see when I look in the mirror.

I’m learning from the past, moving forward with wherever life takes me next and remembering my true worth … with a stale/semi-trendy new haircut (which I really love) … and with my eyes focused on what is real and right and good.